The Citizens’ Assembly on Brexit has come to an end. After two weekends of intense deliberation, the members voted on a range of options for the form they want Brexit to take in relation to trade and immigration. Their conclusions will surprise some, and they deserve detailed attention from politicians and commentators. Assembly Director Alan Renwick summarises these conclusions and reflects on the weekend as a whole. He argues that, while the Brexit debate is often presented in stark binary terms, the Citizens’ Assembly suggests that the British public are capable of much subtler thinking – if only they are given the chance.

In my last post on the Citizens’ Assembly on Brexit, I reported on a hugely successful first weekend of deliberations. In advance, we had, through stratified random selection, recruited a group of Assembly members who reflected the composition of the UK electorate in terms of age, sex, ethnicity, social class, where they lived, and how they voted in last year’s referendum (25 voted Leave, 22 voted Remain, and three did not vote). We had also developed a programme and set of briefing papers that had been vetted by our advisory board, comprising supporters of both sides in the referendum, as well as experts in balanced communication. At the first weekend itself, remarkably, every Assembly member attended. They showed immense dedication, working long hours as they reflected on their own views, discussed ideas with fellow members, listened to experts, and quizzed those experts in depth. The experts presented diverse perspectives, some emphasising the benefits of single market membership or immigration, while others pointed out the costs of high immigration or argued for the advantages of cutting free from the single market and customs union. Our team of professional facilitators from Involve did a superb job of guiding proceedings and keeping the discussions on track.

This time I can report on an equally successful second – and final – weekend. Attendance was again astonishingly high: every member but one (who was ill) returned. Once again, all (and I do mean all) were tremendously focused and limitlessly good humoured. Members naturally did not always share each other’s views, but they listened and spoke respectfully and genuinely. Our facilitation and support teams were again inspirational. It was a privilege to be there.

While the first weekend focused on learning, the second was all about deliberation and decision-making. We began on Friday evening with short talks and Q&A sessions with two prominent politicians: Graham Brady MP, chair of the Conservative backbench 1922 Committee, spoke for leaving the single market and customs union; Labour MP Kate Green advocated the opposite. Thereafter, there were no more external speakers. The weekend was devoted to the Assembly members, who reflected on what they wanted post-Brexit policy-making to achieve and then on which policy options they wanted the government to pursue.

As at the first weekend, we focused on post-Brexit policy towards trade and migration. After carefully considering long lists of potential policy objectives, members voted on those that they wanted to prioritise. Each member could vote for six objectives relating to trade policy and six relating to migration.

Through this process, members decided that UK trade policy should, above all: minimise harm to the economy; protect the NHS and public services; maintain living standards; take account of impacts on all parts of the UK; protect workers’ rights; and avoid a hard border with Ireland.

They decided that UK migration policy should, above all: be linked to investment in training for UK nationals; keep better data on migrants; enable us to sustain public services; benefit our economy; be responsive to regional needs; and include better planning of public services.

Trade with the EU

Having discussed their objectives, members moved on to consider concrete policy options. They began by considering options for how we trade post-Brexit with the EU. They considered four possible approaches:

The implications of these options were set out (in so far as they are knowable) in relation to the economy, public services, the degree to which the UK can set its own rules, contributions to the EU budget, and the regulation of workers’ rights, environmental standards and other matters. (This and other presentations will be available soon on our website.) After further detailed discussion, members voted by ranking the options in order of preference.

As the first chart below shows, members’ first preferences spread widely across the options. Few went for the ‘no deal’ option – hardly a surprise, given that it is generally seen as no more than a fall-back if talks fail. The most popular option was a limited trade deal, though a majority of members wanted, if possible, some kind of closer relationship with the EU.

The second chart takes account of lower preferences by assigning three points to a first preference, two to a second preference, and one to a third preference. Here, the option of a comprehensive trade deal came marginally ahead, as it received many second preferences. (Electoral system aficionados will want to know that counting by alternative vote produces the same result.) 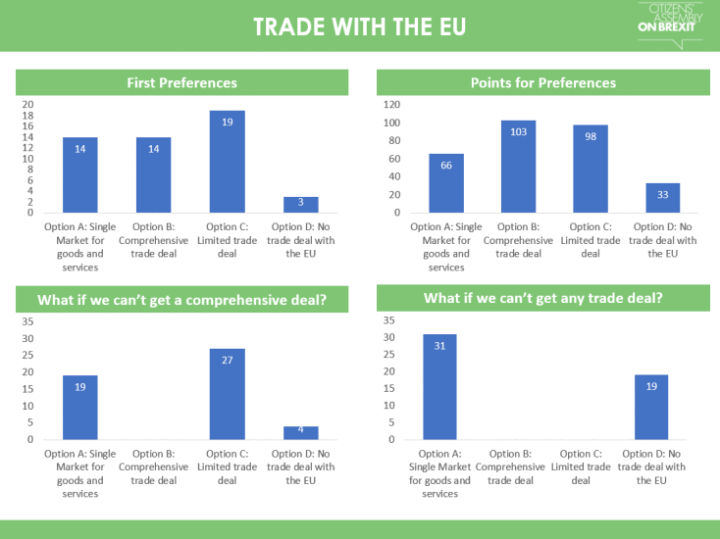 Trade beyond the EU

Next the Assembly considered how it would like UK trade with countries beyond the EU to be governed. It assessed three options:

We presented the implications that each of these options would have for the quality (from a UK perspective) of trade deals with countries outside the EU, the appropriateness of tariffs to UK needs, the degree of control that the UK has over trade policies, and the level of customs controls on the UK/EU border, with its potential effects both on trade and on community relations in Northern Ireland.

This time, as shown below, members preferred a bespoke deal by a clear majority. If it turns out that no such deal is possible, however, they would prefer to stay in the customs union than to leave with no deal.

Migration between the UK and the EU

The third area that members considered was policy towards migration between the UK and the EU. Here there were five options:

We presented the implications of these options for the economy, jobs and wages, public services, population, housing, culture, and the ease with which UK citizens could move to EU countries.

We had not included the second option in our original plans, but added it in light of members’ feedback at the first weekend: they were interested to hear that single market rules do not confer an unconditional right on all EU citizens to reside in the UK, but that the UK makes little attempt to remove those who do not have a right to remain. Though we emphasised to members that the impact of exercising the available controls on total immigrant numbers would be small, the option of maintaining free movement of labour while using permitted measures to prevent abuse was supported by the majority – though only the bare majority – of members. Strikingly, only seven members chose option E, which we made clear was the option that would reduce total immigration furthest.

That most members took such a permissive attitude to immigration may surprise some: national debate suggests that a desire to reduce immigration is a primary driver of public concerns towards Brexit. The discussions among members suggested, however, that they had come to a subtler view. Most wanted a system that would maintain the benefits of immigration while also minimising the costs. Beyond measures to remove migrants who cannot support themselves financially and prevent benefit fraud, they also wanted better training for UK citizens so that the need for immigration is reduced. And they wanted more effort to relieve pressure on public services in parts of the country where immigration is particularly high.

Fitting it all together

Finally, members considered a range of possible Brexit packages, focusing on the relationship between trade with the EU and migration to and from the EU. We considered six packages:

As shown below, their preferences at this stage were strongly consistent with those they had expressed earlier. In terms of first preferences, option C came top, closely followed by option B. Giving points for preferences again put option C marginally ahead, while counting by the alternative vote (not shown below) revealed a tie, with 25 votes each for options B and C. These patterns fit the previous preferences for a bespoke trade deal and free movement of labour with controls.

Finally, we looked at what members would prefer if it turns out that a trade deal is not an option. As previously, they favoured staying in the single market over doing no deal.

The top headline from the Assembly – as reflected in our immediate post-Assembly press release – is that members rejected the ‘no deal’ option. In most respects, their optimal outcome (at least among the options currently on the table) is that the UK should decouple itself from the EU and secure its own bespoke arrangements. Should that prove unattainable, however, members would prefer to stay in the single market rather than do no deal at all. Just as some of our leading politicians are talking up the no deal option, the Citizens’ Assembly on Brexit – by a substantial majority – has said that it does not want the UK to take that route.

We should remember that this is not because the Assembly was full of Remainers. As noted above of the 50 members who attended the second weekend, 25 voted Leave in the referendum last year, while 22 voted Remain and three did not vote. Nor was the Assembly given a biased picture of the options. As noted above, the programme for the Assembly, the briefing papers, and the options were vetted by our diverse advisory board, and the speakers at both weekends represented a balance of views.

Rather, the results simply reflect the conclusions of a cross-section of the UK electorate who have dedicated two weekends to learning about and discussing the issues in depth and come to carefully considered views. Whether they reached the ‘right’ conclusions is not for me or anyone else to say: there is no one right answer to such complex questions, and legitimate disagreement will continue. But their conclusions deserve to be taken seriously.

In a democracy, policy decisions must ultimately be based on public opinion. For democracy to work well, public opinion should be informed and considered: people should be able to reflect on their own values and interests, assess how the available options might affect those values and interests, and choose accordingly. Far too often, our democracy falls well short of those ideals. Voters are expected to make major decisions in an environment of rhetoric and misinformation; they often lack the time needed to cut through the cacophony of voices and find those worth listening to.

The Citizens’ Assembly on Brexit has gone further than any previous exercise in revealing what members of the public think about the Brexit options when they have had the chance to learn about the issues, consider their own priorities, and work out what they want. It has revealed a much subtler picture of public opinion than many have come to presume. It deserves to be listened to. I hope very much that politicians of all persuasions will pay careful attention to what the Assembly has said and reflect on how best to respond.

This blog was originally posted on the Constitution Unit blog and is reposted with permission.

One thought on “Citizens’ Assembly on Brexit: results and initial reflections”