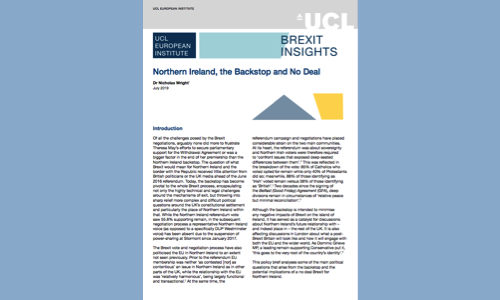 Boris Johnson is demanding that the Withdrawal Agreement is scrapped and renegotiated, and is insisting that he won’t meet EU leaders until they agree to this. The major source of contention is the backstop, which guarantees an open border on the island of Ireland post-Brexit, but ties the UK to the EU’s Customs Union. In a new Brexit Insights paper, Dr Nicholas Wright assesses the politics of the backstop and ‘no deal’, and what all this means for Northern Ireland.

During his leadership campaign, Prime Minister Boris Johnson engaged in an increasingly shrill rhetorical arms race with his rival, Jeremy Hunt, over who will be toughest with the EU in delivering Brexit. In particular, his ire was focused on the hated ‘Irish backstop’ which has come to symbolise all that Brexiters loathe about the Withdrawal Agreement. Indeed, Mr Johnson has promised to remove this element of the deal, declaring that if the EU will not renegotiate, then the UK will leave on 31 October, deal or no deal, suggesting that the costs of exiting in such circumstances will be ‘vanishingly inexpensive if you prepare’. Such claims fly in the face of reality and nowhere can this be seen more clearly than in Northern Ireland. Indeed, it is here that the consequences of Brexit and the trade-offs implicit in its delivery are most starkly revealed.

Since the beginning of the Brexit process, the UK government has been trying to reconcile the ‘Irish Trilemma’: UK departure from the EU’s single market and customs union; an open border between Northern Ireland and the Republic; and no new trade or regulatory barriers between Northern Ireland and the rest of the UK. You can have any two, but a combination of all three is impossible. This matters because the 1998 Good Friday Agreement and all that has resulted from it were predicated on the open and invisible border and shared regulatory space that come with EU membership. These have underpinned efforts in Northern Ireland to chart a new pathway, not least by reducing the prominence and difficulty of complex questions around identity. Doing so has not been easy, something demonstrated by the collapse of power-sharing and suspension of the Assembly in Stormont. The prospect of changes to border arrangements – and particularly anything necessitating the re-establishment of any border infrastructure – therefore risks further undermining a fragile equilibrium that reflects Northern Ireland’s ‘relative peace but minimum reconciliation’.

Both the UK and EU agree that special arrangements to mitigate the consequences of Brexit in Northern Ireland are essential and the backstop is the legal expression of their joint commitments in this regard. It is an insurance policy to guarantee that whatever the final relationship negotiated – which both sides have declared should be as close as feasible – Northern Ireland will be protected. Given all the noise and fury surrounding the backstop, three key points should be noted: first, neither the UK nor EU want it to come into force; second, a majority of Northern Irish voters as well as its business and farming sectors support it – despite opposition from the DUP, upon whose votes the Conservatives currently rely to remain in office; and third, its application to the whole of the UK rather than just Northern Ireland as originally envisaged came at the insistence of the British government. Mr Johnson was willing to support Mrs May’s Withdrawal Agreement – including the backstop – at the third time of asking at the end of March. Thus, the willingness of the new Prime Minister to now countenance a no deal Brexit if the backstop is not removed whilst not offering any serious alternative proposals to address Northern Ireland’s unique situation suggests either a lack of understanding of the ramifications of such a decision or a reckless lack of concern.

What would no deal mean for Northern Ireland? The Department for Exiting the European Union (DExEU) has confirmed that it will be the worst affected part of the UK – ‘the cumulative impact is expected to be more severe […] and to last for longer’. DExEU expects major disruption, particularly to integrated supply chains, while increased costs are likely to ‘affect the viability of many businesses’. While SMEs and farmers in Northern Ireland’s border regions will be particularly challenged, some forecasts estimate the cost of no deal to the whole Northern Irish economy at £5 billion over 15 years. Given this is one of the UK’s poorest regions, any significant economic dislocation will pose huge challenges, placing further strain on the region’s social fabric and its politics. Perhaps the greatest concern is the implications for the peace process and the possibility of a return to the dark days of the Troubles. Both the former and current Chief Constables of the Police Service of Northern Ireland have highlighted increasing dissident republican violence and warn that any new physical border infrastructure would be targeted by those determined to exploit Brexit in their pursuit of Irish unification.

For three years, Theresa May sought to square the circle of delivering Brexit whilst not undermining the Good Friday Agreement. Absent a feasible alternative and for all its imperfections, the backstop is the only mechanism that comes close to doing that. Boris Johnson would be well advised to consider very carefully the implications of abandoning it: Northern Ireland cannot afford a ‘do or die’ Brexit.

This article is based on Northern Ireland, the Backstop and No Deal – a Brexit Insights paper