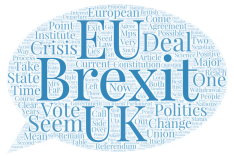 With the Brexit debate constantly focused on the political saga and developments in the UK, we continue to forget that it takes two to tango. Seven of our experts offer their reflections on the current Brexit impasse, from the perspective of the EU and its Member States.

No-deal is not the worst outcome for most players on the EU’s side.
Dr Christopher Wratil – UCL Political Science

“Many in the UK still think that the EU wants to avoid no-deal at any cost and will eventually reopen the withdrawal agreement, and potentially remove the backstop or make other concessions to the UK. But they do not understand that no-deal is not the worst outcome for most players on the EU’s side.

Many governments, their domestic publics, and even business groups at the national level are more concerned with preserving the EU in its current form than with the short-term turmoil of a no-deal Brexit. They view the long-term benefits of the EU’s integrity as more important than short-term losses from no-deal. Some even want to see the UK suffer to set an example for other Member States. From the EU’s perspective, any deal that endangers core principles of the Single Market or, in fact, any other key aspect of European integration is less desirable than no-deal.

It is therefore very unlikely that the EU will make any major concession on the Irish backstop or other parts of the withdrawal agreement. The EU is good at relabelling and repackaging, but it will likely be unwilling to compromise on substance. The “threat” of no-deal is mostly void.”

That the UK’s politics looks likely to be unstable into the years ahead is of concern for most European observers – whether the UK is in or out of the EU.
Dr Kirsty Hughes – UCL European Institute Advisory Board

“There are still multiple possible Brexit outcomes. In fact, this uncertainty and lack of clarity, perhaps more correctly termed political chaos, is one of the defining features of Brexit. The UK could yet leave the EU with a deal (of various types) or without a deal, possibly on 31st October (notwithstanding the recent legislation ensuring an extension is requested by the UK government) or later, or there might be an extension of Article 50 with all Brexit options still open or the UK might yet remain in the EU.

That the EU leaders would like this Brexit uncertainty to end sooner rather than later is clear, and preferably with a deal rather than a no-deal Brexit. But if an Article 50 extension request is made (by whoever is prime minister at the time) and it’s for the purpose of holding an election or (less likely) to hold a second referendum, it’s likely to be granted though this can’t be guaranteed.

That Boris Johnson became prime minister and has suspended parliament – though the Supreme Court could declare that prorogation illegal this week – is one more reason why the EU’s leaders may prefer the UK does go ahead with Brexit rather than change its mind. Yet there are differing views on how welcome it would be if the UK changed its mind and revoked Article 50. This would be welcome in Ireland and in some but not all other Member States – but how welcome would depend on whether the shift to remaining in the EU was a marginal and hotly contested one. That the UK’s politics looks likely to be unstable, divided, and quite probably still failing into the years ahead, is only too clear to most European observers – and of concern whether the UK is in or out of the EU.”

The idea of a “clean break” with the EU is simply a meaningless political slogan.
Prof. Philippe Marliere – UCL SELCS

” There is no such thing as “no-deal Brexit”. The UK will eventually have to make a deal with the EU, its main trading partner, after leaving the Single Market. The question that one should ask is: will the UK make a deal as an equal partner or not?

It is therefore quite incorrect to claim – as Boris Johnson does – that he will extricate the UK from the EU on 31st October “come what may”. Regardless whether the UK leaves at the end of October with or without a deal, the UK will have to come to some kind of trade agreement with the EU. In other words, there is no such thing as a “clean break” from the EU.

The truth of the matter is that if the UK leaves without an agreement on 31st October, it will be in a much weaker position to safeguard a beneficial trade agreement afterward. A “no-deal Brexit” would mark the start of a complex and risky series of negotiations with the EU. Such an exit would simply take the UK legally out of the EU. The UK would have to preserve its economic, security, political and human ties with its European partners.

The UK will thus have to negotiate and sign a new formal agreement with the EU. It cannot avoid it. This just shows that the idea of a “clean break” with the EU is simply a meaningless political slogan. The UK will also have to think carefully about what kind of partnership it wants with the EU in the immediate future.”

The EU is unlikely to refuse an extension request with an election imminent.
Prof. Ronan McCrea – UCL Laws

“The likely Brexit endgame is finally becoming clear. The prorogation gamble has likely cost Brexiteers their chance of achieving Brexit by October 31st. It is very difficult for Johnson to avoid requesting an extension and the EU is unlikely to refuse an extension request with an election imminent. While the EU 27 would almost certainly agree to extend for an election, a risk with this approach is that it might require them to agree to an extension without knowing when the election will take place, thus raising the risk of a number of months with a potentially disruptive UK in the EU.

Whatever the outcome, Britain’s constitution will never be the same again. Brexit has brought into the open all sorts of tensions, between Scotland and England, between conventions and written rules and between parliamentary and referendum democracy that will be with us for some time to come.”

“In France over the summer, I followed the Brexit events from across the Channel. In the French media, the Brexit saga is now described and analysed as a psychology case-study of national introspection. Why do the French now resort to medical language to explain Brexit?

In part, naturally, complacently, to distance themselves from such “unreasonable” behaviours. However, this Freudian vocabulary also takes precedence because Brexit is indeed an inward quest for identity and because legal arguments have failed us. In the continuity of the “Fundamental British Value” rhetoric instigated by Theresa May, Brexit is about re-discovering a national identity.

Whilst this goal is not intrinsically problematic, last weeks’ events show how vital it is to undertake these debates within a legally-binding constitutional framework. Constitutional conventions have proven insufficient to safeguard the three key features of constitutionalism, namely, in Michel Rosenfeld’s words: limited government, adherence to the rule of law and protection of fundamental rights. At stake in the handling of Brexit is not only our relationships with our European partners, but the fate of British constitutional democracy. ”

Brussels was confused more than it was intimidated by the UK no-deal tactics.
Dr Ben Martill – University of Edinburgh

“Because the UK will suffer far more from a no-deal Brexit than the EU27, which – with the exception of Ireland – will absorb the shock in a more diffuse manner, the only leverage British negotiators have is to convince the EU that they are willing to accept such an unreasonable outcome. Theresa May tried gallantly to convince Brussels that “no-deal is better than a bad deal”, but she simply wasn’t believable. For one thing, she had campaigned for Remain. Moreover, she seemed to be willing to agree to each and every condition the EU attached to the withdrawal agreement. And the mixed messages didn’t help. Some MPs were threatened with the prospect of a no-deal if they failed to support the agreement, others were threatened with the prospect of no Brexit at all. Brussels was confused more than it was intimidated.

The search for credibility partially explains Johnson’s behaviour in recent weeks. Support for a no-deal Brexit in the leadership campaign, the ramping up of hard-line anti-Brussels rhetoric, and the contentious proroguing of Parliament – all these are designed with a single aim in mind: To convince the EU that a renegotiation of the Irish backstop will be less costly than having the UK crash out of the Union. Johnson’s threat to ignore the legislation preventing a no-deal Brexit is likely an empty one. It is designed purely with the Brussels audience in mind, view a view to convincing them this latest dent to the credibility of no-deal can be overcome domestically. It is unlikely to work. EU unity has held remarkably well and few in Brussels seem convinced by Johnson’s cheap scare tactics. If anything, they seem more irritated than anything else, and British threats have turned support for the backstop a cornerstone of the EU’s own credibility. Moreover, Johnson himself is not credible; his wavering on Brexit is well understood, as is his penchant for theatrics.

With Brussels unlikely to budge, and the UK very unlikely to crash out without a deal, expect Johnson’s sights to turn to his domestic audience in the weeks ahead. Whether he will be able to sell the withdrawal agreement against the backdrop of no-deal is anybody’s guess.”

The EU still has control over the conditions of an extension.
Clement Leroy – UCL European Institute

“Despite the growing frustration in the European capitals, it remains the case that the EU would grant an extension in almost all conceivable scenarios. Not much has changed since Theresa May’s request for an extension in March 2019. EU leaders would certainly want to bear no responsibility for a no-deal outcome, even if the instability of the current negotiations prevents the EU from focusing on other priorities. One of the EU’s biggest strengths could even be its capacity to still function despite having  “dysfunctional” Member States. The situations in Italy, Greece or Hungary, for example, are all existential lingering threats to the EU that the current institutions have somehow manage to mitigate.

Lingering instability is thus not a good enough reason to refuse an extension and risk the mayhem of no-deal. However, the EU still has control over the conditions of an extension: in March, EU leaders refused the Prime Minster’s request of a new Brexit date by June 30th and instead proceeded in two steps: a first new Brexit deadline of April 12th to give time for a deal to pass and then October 31st. Nothing prevents them from doing it again: a short delay to the exit date to get a clearer idea of  the timetable for an election or a referendum, and then a second offer of a longer one.”

Note: The views expressed in this post are those of the authors, and not of the UCL European Institute, nor of UCL.

One thought on “What’s next for Brexit: views from Europe”